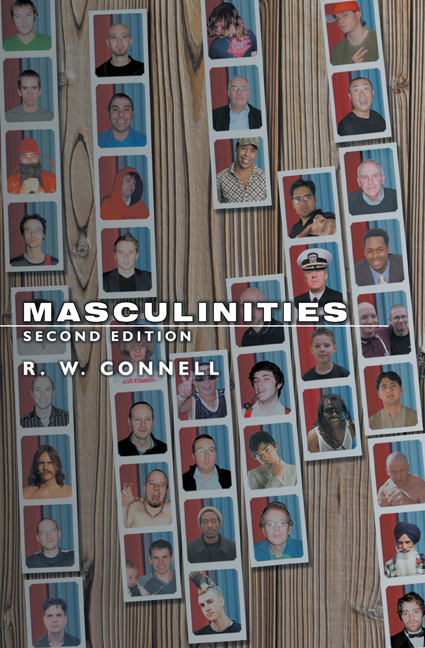 “Treating ‘men’ and ‘women’ as undifferentiated categories, it is possible to draw up a collective balance sheet for men showing both the gains and losses, or benefits and costs, from contemporary gender arrangements.

The model distinguishes four major dimensions (or structures) in gender relations. This discussion focusses on the current state of play in the rich Western Countries (the European community, North America and Australasia).

Advantages: Men hold predominant authority in business and the state, with a near-monopoly of top positions. Men and boys tend to control public spaces such as streets and playgrounds. Men hold authority in many families and institutions of civil society. Men have near total control of coercive institutions (military, police) and control of the means of violence (weapons, military training). Men are relatively free from rape and serious domestic violence.

Disadvantages: Men are the overwhelming majority of people arrested and imprisoned, including those executed. Men are the main targets of military violence and criminal assault. Men are more likely to be the targets of economic competition and organizational rivalry.

(b) Division of labour

Advantages: Men have approximately twice the average income of women, and control most of the major concentrations of wealth. Men have higher levels of economic participation, and better access to future opportunities e.g. promotions. Men, especially husbands, receive benefits from the unpaid labour of women. Men control most of the machinery (e.g. transport, power generation, computers) that is the basis of a modern economy and specifically multiplies the economic value of labour.

Disadvantages: Men predominate in dangerous and highly toxic occupations. Men include a higher proportion of sole earners (‘bread winners’) with social compulsion to remain employed. Because of the occupational division of labour, men’s skills are subject to rapid obsolescence. Men pay a higher average rate of taxation, with income disproportionately redistributed to women, through the welfare state.

Advantages: Men control most cultural institutions (churches, universities, media). Religion generally, and sometimes specifically, defines men as superordinate to women. Men have higher levels of recognition, i.e. they and their activities are regarded as more important, newsworthy, and appropriate to resource. (Example: sport.) Boys and men predominate in high-return and highly resourced areas of education. (Examples: MBA, biotechnology, IT.)

Gender centrally involves social embodiment, based on body-reflexive practices where the body is both agent and object of practice. The gender order therefore has important effects at the level of the body as well as in social relations. […]

This ‘balance sheet’ is not like a corporate accounting exercise where there is a bottom line, subtracting costs from income. That is the error made by backlash polemicists who try to refute feminism by reciting men’s disadvantages. As Cox (1995) shows, a rhetoric of ‘competing victims’ leads nowhere. We cannot even understand the balance by seeing the disadvantages as ‘the costs of being on top’, though that is a better starting point – it suggests that there is a connection between the up-side and the down-side.

A fully relational approach to gender sees the connection as substantive. The disadvantages listed above are, broadly speaking, the conditions of the advantages. Men cannot hold state power without having become, collectively, the agents of violence. Men cannot be the beneficiaries of domestic labour and emotion work without losing intimate connections, for instance with young children. Men cannot predominate in the capitalist economy without being subject to economic stress and paying for most of the social services. And so on.

But the men who benefit most, and the men who pay most, are not necessarily the same people. Here it it is easy to fall into logical fallacy by ignoring diversity within the category ‘men’. The men who are targets of disproportionate violence, for instance, are not the same men as those who hold military and political leadership positions. ‘Men’ pay more tax, but the bulk of tax transfers come from wage-earners, not from the corporate elite. The men who benefit from recognition and hold social authority are not, by and large, those who do toxic and dangerous work or who have high rates of imprisonment.

Class, race and generational differences, to recall a familiar argument, cross-cut the category ‘men’, spreading the gains and costs of gender relations very unevenly among men. The different situations defined by these structures are among the important bases of diversity in gender practices and consciousness, that is to say, among patterns of masculinity.

Should we therefore abandon the category ‘men’ altogether? That would be as much a mistake as reifying it. The overall gender relation between women and men is a powerful basis of consciousness and practice too. For instance, those who enforce by extreme violence the marginality of gay men – that is to say, homophobic killers – are mostly young and economically disadvantaged men. Yet to themselves they are proving their manhood and defending the honour of men (Tomsen 2002). Those teenagers who engage in violence against girlfriends are, predominately, at the bottom of the economic order. Often they have suffered the toxicity of the gender order directly, by violence at the hands of fathers or stepfathers. Yet they too think of themselves as defending the legitimate rights of men and putting women in their proper place (Totten 2000).”